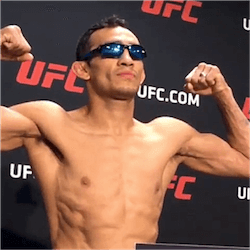 Tony Ferguson has managed to keep the dream of beating Conor McGregor alive by defeating Kevin Lee by submission during the MMA fight of the year on Saturday.  The win afforded Ferguson the title of interim lightweight champion.  McGregor is currently still the official lightweight champion but has not defended the title since November of last year when he beat Eddie Alvarez at UFC 205.

McGregor had presumably been spending all of his time and energy in preparation of the fight against Floyd Mayweather Jr on August 26th and as such has not done much in the way of defending his lightweight title.

McGregor has however reported keeping a close eye on the weekend’s fight between Lee and Ferguson.  Ferguson certainly did not disappoint, having busted up his opponent’s nose with a single jab alone, proving once again that his ground work was among the best in his division and that he certainly deserved the interim title.

Ferguson made for a closing to the day’s events that was true to McGregor’s verbal strikes on the microphone, challenging the Irishman to either defend or vacate the title.  McGregor may very well have met his perfect match for squaring it off for the lightweight title, with Ferguson’s fighting style and verbal prowess matching his own on all counts.

Ferguson went all out during Saturday night’s main event, having gone into full attack mode against Kevin Lee, first squaring it off with his awkward fighting style before locking his opponent in a triangle choke to eventually drive the tap home at 4:02.

All wasn’t lost to Lee at the onset though, after having started out strong and aggressive during the opening round.  A series of savage hard-knocking strikes from Lee’s end had Ferguson in a spot of trouble by the close of the first round.  Ferguson must have drawn on his pre-fight pride though, getting back into it during the second round and weathering the storm in a quick and effective way.

Ferguson ended up controlling Round 2, bloodying Lee’s nose.  Round 3 culminated in a take-down from behind, finally forcing Lee to submit to Ferguson’s submission attempt from the back.

Despite a pre-fight promotion that was filled with creative trash talk, Lee made it clear that he held no personal grudges against Ferguson after the fact and that he hoped that Ferguson would be sticking it to McGregor where it mattered.