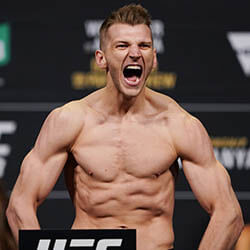 Dan Hooker, the Kiwi MMA fighter with a blue belt in Brazilian Jiu-Jitsu says that the camp he attended to get ready for his fight with Dustin Poirer has been tough. But The Hangman says that he’ll be heading into their Lightweight Showdown confidently and more than willing to emerge from another five-round bloodbath if that’s what it takes.

Hooker, 20-8, is set to face off against The Diamond at the UFC Fight Night Las Vegas scheduled for June 27. This matchup has just been confirmed after months of uncertainty around its going ahead due to the chaos caused by the novel coronavirus COVID-19 pandemic worldwide. And it looks to be another potentially savage competition for Hooker, who was awarded a split decision victory over Paul Felder, the Irish Dragon, at UFC Fight Night Auckland. It took place on the 23rd of February and ended up being so tough that both men emerged from it on stretchers and were whisked straight to the hospital from Spark Arena.

Hooker later commented on the fight, calling it a very demanding one and complimenting Felder, saying he presented an awesome challenge. The Hangman added that he learned more from that single bout than he did in the five leading up to it. Hooker stated that going the full five rounds, acutely aware of the pressure of fighting in a sold-out stadium in his hometown, gave him invaluable experience in terms of mental preparation. And it’s what he’s going to be bringing to the ring on the 27th.