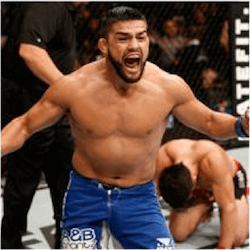 UFC Fight Night 122 Not Equally Kind To Everyone

UFC Fight Night 122 delivered quite a number of surprises, including the knockout of former middleweight champion Michael Bisping in the very first round of the main event.  The result is Bisping having suffered a back-to-back loss for the first time in his 39-fight career.

Never one to be deterred easily, Bisping was quoted as saying after the fight that it was going to take more than a youngster like Kelvin Gastelum to get rid of him.  He went on to say that he (Bisping) was enjoying himself and insinuated that the knockout had been no more than a lucky shot on the part of Gastelum.

The UFC certainly has had a strange year of it, most notably the fact that the headline fight of the year arguably had precious little to do with UFC at all.  Ever since the money fight, UFC action has been trudging along at a snail’s pace.  To add insult to injury, the UFC’s broadcasting agreement with Fox is set to expire in 2018, making 2017 a highly inopportune time for things to be slacking off in such a drastic way.

Now, the question on everyone’s lips is whether Dana White is still the man belonging at the helm.  White has been the one thing most associated with the UFC brand for the longest time.  But it must also be mentioned that this was in a time when UFC was still trying to get a foot in the proverbial door.  White was UFC in person-form: brash, rude and downright offensive.  For the longest time, it worked.  Now, it may no longer be enough.

The early days have passed and White seems to have taken on the shape of a barking dog with precious little bite.  Even his claims and promises hold no weight.  The standing joke in UFC circles is that if Dana White has said that its false, then it must by default be true.

White has become a running joke and if anything, this is an image that is completely counter- productive to the brand that is UFC.  In the beginning it was assumed that White would be around for a very long time, having been such a crucial part of the brand.  Now, it seems as if he’s long passed his sell-by date.

The writing is on the wall.  Whether Dana White will read what it says, is another question altogether. If you want to bet on future UFT fights, or any other event, get in on the action at Sportsbet, one of New Zealand’s leading online bookmakers.