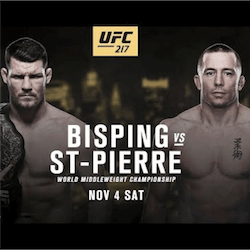 Fans are hyped and ready for UFC 217 and it’s not long to go now until November 5th.  This despite Joe Rogan claiming that the tickets to the events aren’t selling very well at all.  If this is in fact the case it will be quite surprisingly so, with Michael Bisping’s fight with Georges St-Pierre standing out as the expected main event.  Cody Garbrandt will also be taking on TJ Dillashaw for the bantam weight title and Joanna Jedrzejczyk will be going up against Rose Namajunas for the strawweight title.  Stephen Thompson will be fighting Jorge Masdival.

According to Joe Rogan the problem lies squarely with Georges St-Pierre and UFC’s refusal to let go of the Jonny Hendricks fight of four years ago.  Rogan contends that its only hardcore UFC fans who will remember that particular fight at all, and the St-Pierre has faded from the UFC scene quite significantly since.

None of this seems to be too much of a bother to St-Pierre who responded by saying that he did not care for money or recognition and that he would rather win and earn nothing than lose for top dollars, no doubt a bit of a jab at McGregor and Mayweather’s Money Fight.

St-Pierre said that it was his desire to fight well and his fear of losing that would serve him well on fight night and punters who want to back him will find great odds online at Crownbet.

For Steven Thompson and Jorge Masvidal the November 5th brawl is a dream come true.  The two top welterweight contenders have been wanting this for a long time.  Masvidal is coming to the fight off a defeat against Demian Maia in May and Thompson on the back of having dropped two majority decisions in two seperate fights against Tyron Woodley.

Cody Garbrandt is making UFC headlines ahead of the November 5 fight with TJ Dillashaw but for all the wrong reasons.  Garbrandt has made no secret of the fact that he doesn’t approve of St-Pierre’s stand-off with Bisping being on the cards as the main event.  Garbrandt has said that the St-Pierre/Bisping fight is a “gimme” fight and was only made part of UFC fight night in order to sell more tickets.

Garbrandt went on to say that his and Dillashaw’s fight should have been earmarked as the main event, as this was a case of a champion going up against a former champion.  He said that he meant no disrespect to Rose and Joanna, who were also two great fighters.

The general idea is that according to Garbrandt, St-Pierre and Bisping should not even be fighting at UFC 2017 at all, let alone be the star attraction.