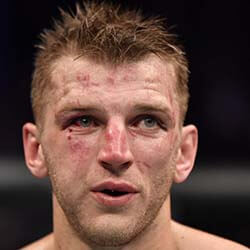 New Zealand UFC veteran fighter Dan Hooker hasn’t yet decided his next move after suffering a first-round defeat at the hands of American powerhouse Michael Chandler at UFC 257 in Abu Dhabi.

The Kiwi’s next move has become a hot topic of conversation in UFC and MMA circles after Dan “Hangman” Hooker left his gloves hanging in the Octagon after the disappointing stoppage. Such a move is typically considered an intention to retire from the ring.

But Hooker’s actions – and certainly his silence on the topic and the way forward – are nothing special or out of the ordinary, said coach Eugene Bareman earlier this week. Bareman said though Hooker hasn’t yet indicated a willingness to discuss his precise next move, the fighter has always been known as someone who prefers a period of introspection before revealing anything further plans or intentions to his coaching staff. Hooker isn’t even talkative after a win, quipped Bareman, let alone after a first-round stoppage.

As for the dramatic leaving behind of his gloves, kickboxing coach Mike Angove says he believes this was nothing more than frustration on Hooker’s part. The Kiwi’s frustration should come as no surprise given it knocked him out of title contention, explained Angove.

Retirement wouldn’t really be a reasonable option for the New Zealander, who at 30, seems to have several strong lightweight years remaining in his professional career as a fighter. Bareman has vowed to “talk to Dan” about his plans to the future and the hanging of his gloves at the Octagon but said it would be best if the Kiwi addressed this issue himself.